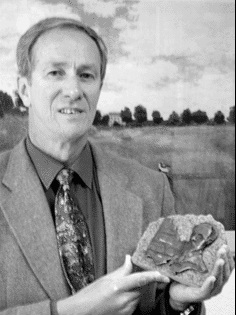 Raymond A.F. Cas, Professor of Geology at Monash University, was appointed as a lecturer in sedimentology at Monash in 1978 after completing a BSc with First Class Honours at Sydney University, and a PhD at Macquarie University. Ray was progressively promoted to senior lecturer, associate professor, and finally to a personal chair in 1995. His nomination for the Selwyn Medal is based on numerous contributions to research, teaching, supervision, and services to geoscience, which have have greatly increased the understanding of Victorian geology and the status of Victorian geoscience and geoscientists.

Research
Ray's research interests are diverse, both in disciplines and regionally. They are published in over 40 refereed journal papers, a volcanology textbook, and over 60 conference abstracts. This summary, however, focusses on his contributions to Victorian geology. Much of the research done by Ray and his students in Australia has been done collaboratively with industry, showing that his research has both pure and applied significance.
Ray’s early research centered on the palaeogeographic and tectonic evolution of the Palaeozoic Lachlan Fold Belt of southeastern Australia (Cas & Jones, 1978, 1979) which was synthesised in the first actualistic Ordovician palaeogeographic and tectonic reconstruction of the Lachlan Fold Belt (Cas, Powell & Crook, 1980) and subsequently in one of the most successful of the GSA SPECIAL PUBLICATIONS (No. 10, ‘A review of the palaeogeographic and tectonic evolution of the Palaeozoic Lachlan Fold Belt of southeastern Australia’, 1983), which remained the foremost general reference work on the region for the next 10 years. This was followed by publication of one of the first regional cross sectional perspectives of the tectonic evolution of the Lachlan Fold Belt in Victoria (Fergusson, Gray & Cas,1986).
In the 1980s Ray also began a detailed assessment of the regional sedimentology of the Ordovician rock system of Victoria. The results were published in the 1988 edition of the GEOLOGY OF VICTORIA and in several other papers (Fergusson, Cas & Stewart, 1989; Cox, Etheridge, Cas & Clifford, 1991).
Together with students and postdoctoral research fellow, J. Wright, Ray also began the first detailed palaeovolcanological reconstruction of the extensive Lower Devonian Snowy River Volcanics of southeastern Australia (Orth, Cas & Wright 1989; Bull & Cas, 1991).
Ray’s studies of the Late Devonian–Carboniferous sedimentary and volcanic successions of the Mount Howitt Province of Victoria and the co-eval Eden–Yalwal Rift Zone of NSW resulted in new palaeoenvironmental, tectonic and palaeovolcanological syntheses (O'Halloran & Cas, 1995, 1996; Cas, Allen, Bull, Clifford, & Wright, 1990; Cas & Bull, 1993).
Ray has supervised four PhD and several Honours projects on aspects of the geological evolution of the Mesozoic–Cainozoic breakup basins. Topics investigated include the bio- and lithostratigraphic, palaeoenvironmental, and diagenetic history (Bodard, Wall & Cas, 1984), the relationship between sea level changes and coal formation, and the sedimentological and tectonic history of early rifting.
Ray has also contributed significantly to the understanding of the Newer Volcanic Province. In 1984 he organized a national research field workshop on continental basaltic volcanism which attracted almost 50 participants. He also led a field trip of the 1993 International Association for Volcanology and Chemistry of the Earth's Interior Volcanological Congress (Canberra) for international visiting scientists and produced the newest, most comprehensive publication on the volcanology of that province as a field guide (Cas, Simpson & Sato, 1993).
He has established an international reputation as a volcanologist, and has contributed significantly to developing the research profile of Australian volcanology internationally. His most significant contribution to research and teaching internationally has been the writing of VOLCANIC SUCCESSIONS: MODERN AND ANCIENT in 1987 (Allen & Unwin, and Chapman & Hall, London), which has sold over 10,000 copies internationally and been reprinted 5 times. Ray's research efforts in volcanology have therefore led to the development of physical volcanology as a new research and teaching discipline in Australian universities.

Teaching
Ray has been teaching Victorian undergraduate geology students at Monash for 20 years. His principal teaching commitments have been in the fields of sedimentology, volcanology, basin analysis, regional geology and tectonics, and field geology. In field courses at second, third and fourth year levels, almost 1,000 students have been introduced to the geology and geological history of Victoria.
Perhaps Ray’s greatest contribution has been his annual week-long physical volcanology shortcourse. This has attracted over 900 industry professionals, research scientists and survey geologists, from many different countries, since 1982; the course is still running strongly. Geologists and research students throughout Australia have benefited from this course which has made a major impact on Australian geoscience.

Supervision
Post-graduate students under Ray’s supervision include 19 PhD, 6 MSc and 75 Honours students during his 20 year career at Monash University. Seven PhDs, four MScs and 38 BSc(Hons) theses deal with many aspects of Victorian geology, so making a significant contribution to our understanding of the geology of Victoria. His research and teaching programs are relevant to industry, with many of the research projects sponsored by industry. He has provided many students with an introduction to the industry working scene before graduating. Ray's volcanology–sedimentology group at Monash is very dynamic, with nine current PhD and seven Honours students and two Postdoctoral research fellows.

Services to the profession and science
Ray was a member of the committee of the Victorian branch of the Geological Society of Australia from 1978 to 1980, and a member of the Stratigraphic Nomenclature Subcommittee for 1981–1984. He helped organise one of the first Selwyn Symposia for the Victorian branch in 1987, arranging for George Walker, the world's leading volcanologist of the time, to present the keynote address. He has presented talks at Victorian branch meetings of the GSA and to other geology-oriented organisations. He was on the Department of Education Curriculum Committee for HSC Earth Science in 1982–83.
As Chairman of the Sedimentologists Specialist Group of the GSA (1981–1982) Ray invited Roger Walker, the world's leading clastic sedimentologist of the time, to Melbourne to present a workshop which attracted over 50 participants. He served on the Council of the GSA from 1983–84. He convened and organised successful symposia in sedimentology and volcanology at two GSA Conventions.

CITATION
Ray has made a uniquely valuable contribution to Victorian, Australian and worldwide geology, generally using Victorian examples. He is a most highly esteemed member of our community, not least because of his friendly, approachable manner, and would be universally recognised as a worthy recipient of the Selwyn Medal.