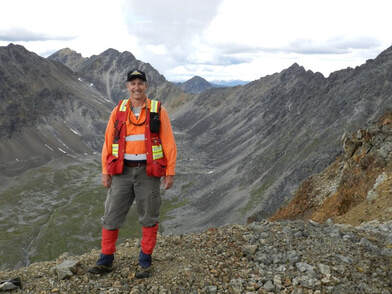 Dr Dennis Arne is an astute scientist, a gifted speaker and an innovative educator. While he has worked in various places in Australia, North and South America, Asia and North Africa, he has made a substantial contribution to geology specifically in Victoria as a doctoral student at the University of Melbourne, a lecturer and researcher at the University of Ballarat (now Federation University Australia), a geochemist at the Geological Survey of Victoria and an exploration geochemist. His current role as Director at Telemark Geosciences involves development, implementation and oversight of gold exploration programmes in the Victorian Palaeozoic, and he maintains an international profile as the current President of the International Association of Applied Geochemists. He regularly contributes to professional forums across the globe.

Dennis has lectured at the University of Ballarat, WASM-Curtin University, James Cook University and Dalhousie University and has presented numerous invited and keynote addresses. At Ballarat, he taught economic geology, geochemistry and field work, taking undergraduate students to the Flinders Ranges, Broken Hill, Nepal and Canada. He continues to be active in professional development training through highly regarded and often oversubscribed courses, offered worldwide through the Economic Geology Research Centre at James Cook University. In teaching, Dennis brings the ideal mix of theoretical context and practical application, and his approachable manner and relaxed style are an inspiration to his students.

Although Dennis’s research spans such diverse subjects as thrust dynamics along the eastern margin of the Tibetan Plateau, portable X-ray fluorescence and its application to exploration, hydrocarbon exploration tools and basin stratigraphy, his recurring passion over 35 years has been Victorian gold. He has contributed strongly to the knowledge base of the geology of Victoria and, in particular, of the geology of its world-famous gold endowment. Dennis is the principal or co-author of 21 refereed journal papers (of a total 41) directly related to gold and base-metal mineralisation in Victoria, as well as five reports of the Geological Survey of Victoria as part of its Gold Undercover series. An important outcome of this research was to precisely constrain timing relationships of gold mineralisation in central Victoria and demonstrate the occurrence of three distinct gold mineralisation events across the western Lachlan Fold Belt. Just as significant has been the detailed documentation of the alteration associated with turbidite-hosted orogenic gold and field-oriented methods for its characterisation. The significance of this research can be gauged by the over 700 citations of his papers in the geological literature.

At the Geological Survey of Victoria where he was Senior Geochemist, Dennis’s ground-breaking research was integral to the success of the Gold Undercover initiative which, in turn, has played a substantial role in the current resurgence of gold exploration in the state. Five major reports, of which Dennis was senior or sole author, addressed the primary alteration systems and secondary dispersion associated with Victorian gold deposits and the interaction between gold deposits and groundwater. In particular, Dennis’s report on secondary dispersion made several important advances by:
​
His research revealed critical aspects of Victorian orogenic gold deposits that now enable more effective and systematic vectoring for such deposits, particularly undercover. Further, his investigation of the hydrogeochemistry of groundwaters that interact with gold deposits demonstrated that groundwater salinity has little apparent effect on Au and As concentrations, and that both elements in groundwater show good fidelity to historical gold deposits (and new discoveries like Tandarra). He provided an expert narrative and context for using hydrogeochemistry as a reconnaissance method for gold exploration in undercover areas. The importance of Dennis’s work as part of Gold Undercover to support Victoria’s mineral exploration industry continues to grow.

Dennis’s contribution to the discipline has been sustained, substantial and ongoing. He is respected both personally and professionally. He has inspired students and co-workers alike and would be a worthy recipient of the Selwyn Medal.
Nominated for award by Stephen Carey, Ross Cayley, Kim Dowling, Stafford McKnight and Haydn Swan, with a separate supporting statement by Ian Duddy.