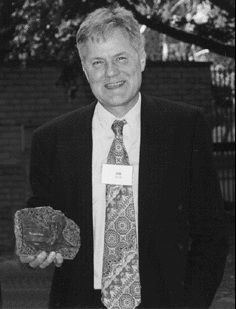 Bill Birch obtained his PhD in the Department of Geology at the University of Melbourne in 1976, with a thesis on volcanic rocks in the Palaeozoic cauldron complexes of central Victoria. This extended a study of the Cerberean Cauldron that began with other Honours students, and the group was the first to interpret these rocks as products of major ash-flow eruptions. This was important work as it drew attention to the remarkable preservation of the Devonian volcanic complexes and to some of their unusual mineralogical features including the abundance of cordierite and garnet. This interest in igneous rocks later encompassed other felsic, mafic and alkaline occurrences in Victoria. In 1974, he commenced work at the Museum of Victoria as curator with responsibilities for the mineral, rock and meteorite collections, a position he still holds.
During this period, he has overseen the amalgamation of the Museum's mineral collections with those of the Geological Survey ofVictoria and the University of Melbourne. Since joining the Museum, Bill has immersed himself in the mineralogical and geological diversity of the region, especially Victoria. His numerous notes, papers and books cater to enthusiastic amateurs as well as to professionals. He has co-described twenty new mineral species, including three from Victoria (all phosphates from granitic rocks—ulrichite, selwynite and wycheproofite), seven from Broken Hill, and five from other Australian localities. His main contributions centre on microprobe analyses obtained in the Melbourne University Geology Department, where he has been an Honorary Associate since 1983. His current projects include studies of another new minerals and several meteorites from Victoria, and a new edition of the book Minerals of Broken Hill. Bill Birch has involved himself in organizations spanning all levels of interest and expertise in mineralogy and geology. These include the Geological Society of Australia, the Mineralogical Society of Victoria, The Gemmological Association of Australia and the International Mineralogical Association. In the Victorian Division of the Geological Society of Australia, he served as Treasurer between 1977 and 1980, and as Chairman from 1987 to 1989. During his chairmanship he organized the publication of the current revised edition of "Geology of Victoria", and expedited the completion of "Victorian Geology Excursion Guide". He was a member of the Division's Editorial Subcommittee in 1991 and currently chairs the Subcommittee responsible for producing the third edition of "Geology of Victoria".

In 2006 Bill was honoured by Australia by being made a Member of the Order of Australia.