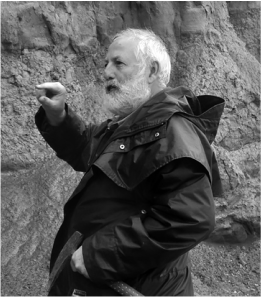 Dr Ian Duddy, Geotrack International, was awarded the 2014 Selwyn Medal at the recent Selwyn Lecture.
Ian Duddy has made important contributions to the Earth Sciences community in Victoria, the geology of Victoria, and many other parts of the world while based in Victoria. He has played a key role in establishing the locally-developed technology of apatite fission track analysis (AFTA) as a leading contributor to the field of thermochronology and to the international Petroleum Industry.
Ian’s PhD research at The University of Melbourne involved geochemistry and the diagenetic evolution of the Early Cretaceous Otway Group volcanogenic sediments
He developed the systematic application of AFTA in a sedimentary basin setting and the discovery that fission track annealing closely parallels hydrocarbon generation in sedimentary basins. During his time at the Melbourne fission track laboratory, he helped establish AFTA as a rigorous tool for thermal history assessment as applied to hydrocarbon exploration. His fundamental fission track research and development work allowed for the prediction of fission-track parameters in geological settings, and the thermal effects of fluid flow in sedimentary basins, based on the use of fission track analysis and vitrinite reflectance data. This work led to Melbourne being acknowledged as a leading world centre in the field of Thermochronology.
In 1987 Ian was one of the co-founders of Geotrack International Pty. Ltd., an international consulting company based in Melbourne, specializing in the application of AFTA to hydrocarbon exploration problems in a range of sedimentary basins worldwide. The company is export focused and leads the world in this particular field. Recognition of its expertise is clearly demonstrated in that all of the world’s major hydrocarbon exploration companies are listed amongst their clients. Ian has played a central role in the company since the earliest origins within the Melbourne Fission Track Research Group and has written many hundreds of reports for clients from around the world. He continues as a director and manager in the company today.
Ian has also contributed more broadly to advancing our understanding of the geology of Victoria and southern Australia, for example through his writing of Chapter 9 on the ‘Mesozoic’ in the most recent ‘Geology of Victoria’ volume in 2003.
Ian Duddy has maintained his close association with the Otway Basin and has played a leading role in its use in education and demonstration of fundamental basin concepts. He enjoys showing other geoscientists, and especially students, the important lessons that can be learned in this important basin and has led numerous field excursions around the basin over many years.