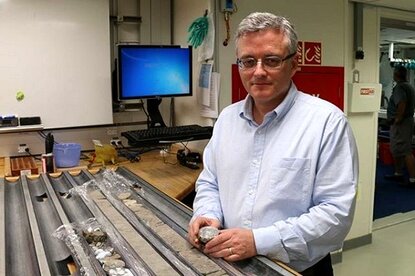 Associate Professor Stephen Gallagher has made significant contributions to our understanding of Victoria’s sedimentary geological record throughout his career. Broadly, his work has developed our understanding of Victorian Cretaceous to recent microfossil evolution, climate change, paleo-oceanography, basin stratigraphy and economic geology. Stephen has over 50 scientific papers on Victorian geology, many of them published in high-impact, international journals, showcasing the significance of his work. This body of research has significantly developed our understanding of marine shelf evolution in south-eastern Australia, with implications for climate, oceanography and petroleum resources. Stephen has also added significantly to Victorian basin stratigraphy, including regional stratigraphic correlations and revised age constraints.

Stephen’s papers form an important record of the climate history of Victoria for the last 80 million years. His research considers both climate variability in a Cretaceous greenhouse world, and the decent into Cenozoic icehouse conditions. This topic has been largely studied from a Northern Hemisphere perspective and so his work adds crucial detail from an Australian (Southern Hemisphere) standpoint. For example, his work on Oligocene climate records from Victoria was the first Oligocene sea level curve published from the Southern Hemisphere.

In other projects, Dr. Gallagher’s work with collaborators has added to several other important aspects of Victoria’s geology including coal stratigraphy, floral history, economic geology and stratigraphic correlations. Highlighting many of his contributions to Victorian geology, Stephen co-authored a chapter in the recent edition of Geology of Victoria. In his broader research he has worked extensively on International Ocean Drilling Project expeditions around Australia and Asia, and has also focused on the Carboniferous geology of Ireland.

Dr. Stephen Gallagher has made significant contributions to Victorian geology through 25 years of teaching, playing a key role in educating multiple generations of geoscientists at the University of Melbourne. He taught first year classes for over 15 years, being instrumental in encouraging many students to continue into geology. In addition, he runs several field geology courses every year which are an important aspect of geoscience education. Dr. Gallagher has won multiple awards for his teaching. He has supervised over 40 Honours and Masters students as well as 11 PhD students.

In terms of service, Stephen served as Chair and Treasurer of the Geological Society of Australia, Victoria Division for several years, being instrumental in recruiting student GSAV members during this time. Stephen has organised four successful Selwyn Symposiums for the GSAV. In addition to this, he has run seminars and short courses for PESA, CSIRO, and most recently was chosen for the Royal Society’s Howitt Lecture.

Overall, Stephen’s contributions to research, teaching and the field of geology in Victoria make him a worthy recipient of the 2020 Selwyn Medal.