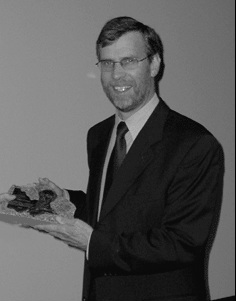 Andrew Gleadow received his PhD from The University of Melbourne in the Department of Geology in 1974. The content and aims of his thesis entitled “Fission track dating and the interpretation of thermal and tectonic histories” represent in many ways the central focus of his subsequent research, exemplifying his passion for and success in developing new and appropriate technologies to solve fundamental problems in the Earth Sciences. Notwithstanding his distinguished excellence in the specialised field of fission track analysis, his publications demonstrate a broad and continuing interest in the Earth and Planetary Sciences, ranging from scientific papers on the history of the moon to the origins of man to the thermal history of Victorian granites.

Following completion of his PhD in 1974, Andy commenced work at the University of London where he continued his research in geochronology and established important working relationships in the international arena with key people in his field. Andy returned the next year to The University of Melbourne where for the following 14 years he served and led in many capacities. From his beginning as a postgraduate scholar to his present position as Head of the School of Earth Sciences, Andy has always had his eye on the future, clearly believing that the future of students and the Earth Sciences were at risk if we stood still.

In this uncertain period of university funding and student education, Andy, both as Head of School at LaTrobe University, as well as The University of Melbourne, has had to fight many battles in attracting the necessary funding to not only help Earth Sciences education survive, but flourish in Victoria. He has managed this task with great success and always with unbridled enthusiasm and optimism. Funding he has attracted for new equipment and facilities has created a superb environment in which to undertake basic research. By doing so, he has attracted top researchers and students to Melbourne. He also co-founded VIEPS and championed the use of multi-media resources for students. Without such strategies, and the keen and passionate leadership shown by Andy, support for the Earth Sciences in Victoria would be jeopardised. Andy is one of few people who have taken on the challenge of leadership in the Earth Sciences and continues to look over the horizon to ensure a stronger future. Among his many strengths, he deserves special commendation for providing such an environment in Victoria where the Earth Sciences are indeed flourishing.

While this citation is squarely focussed on Andy’s support for and leadership in the Earth Sciences in Victoria, his activities in related national and international organisations is equally as distinguished, as evident from his many awards (Fellow of the Australian Academy of Science, Gold Medal of the AINSE, ARC Special Investigator Award, Research Medal for the Royal Society of Victoria, Stillwater Medal of the Geological Society of Australia), professional associations (Geol Soc of Australia, Geol Soc of America, Sigma Xi Scientific Research Society, PESA and American Geophysical Union) and committee work (Council member with AINSE, Co-Chair FT2000, various review committees, editorial boards, and many more).