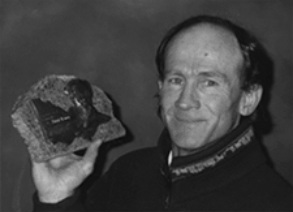 David R. Gray (Dave) obtained a BSc(Hons Class 1) in 1971 from the University of Newcastle, NSW. In 1976 he obtained a PhD from Macquarie University, NSW. These early academic studies started a long quest for a greater understanding of the structure of the rocks in the Lachlan Fold Belt. Dave has held several academic positions, including two years as a tutor in Engineering Geology at the University of New South Wales (1975–1977);
six years as Assistant / Associate Professor (Structural Geology) at Virginia Polytechnic Institute & State University, Virginia, USA (1977–1983), and at Monash University since 1983 where he has progressed from Lecturer to Senior Lecturer to Reader (Structural Geology). Dave's research has been aimed at the understanding of processes of rock deformation in the larger context of collisional orogenesis (mountain building). The underlying philosophy has been that field observations, linked to laboratory analysis of rock microstructure and coupled with strain analysis, would provide the best framework to formulate models to explain the development of structures in rocks. There has been a strong commitment to detailed and accurate field observations, and mapping. Investigations relating to the kinematic development of structures are wide-ranging and include:

Much of the research has been in collaboration with others, including:

Dave has published over 50 refereed papers in international/national journals, including eight in the Australian Journal of Earth Sciences, five book contributions and five field trip guidebooks. His major scientific contributions include:

CITATION
David Gray is a Reader in Geology at Monash University. He is a geologist of national and international standing currently conducting research on problems related to rock deformation associated with orogenesis (mountain building} and the formation of the crust of the Earth. He has gained experience in the United States, New Zealand and Oman as well as the Lachlan Fold Belt of Eastern Australia.
In Victoria he has concentrated on the application of modern techniques for structural analysis. In particular he has been active in microstructural analysis and strain investigations involving extensive periods of field work and laboratory analysis on samples from the Lachlan Fold Belt. He and his colleagues have assisted with the app1ication of new techniques to investigate the temporal aspects of thrust-belt evolution in Victoria. His studies have resulted in a greater understanding of the deformation processes associated with low-grade metamorphic rocks. His numerous publications on this topic are highly regarded and are now widely referenced by his colleagues both nationally and overseas. The detachment models resulting from his work provide an explanation for the movement and emplacement of major thrust sheets within the Lachlan Fold Belt and similar terranes elsewhere.
David has been an active member of the Geological Society of Australia. In particular he has assisted the profession by coordinating a chapter in the revised edition of the Geology of Victoria concentrating on Structure and Tectonics. In this chapter he has defined the major structural elements of the region and has emphasised the role of the intervening fault zones. More recently he has generated additional interest in the geology of the Lachlan Fold Belt with a paper in the Geological Society of London special volume on orogenic belts.
David Gray continues to demonstrate an advanced level of technical excellence and personal energy leading to rapid improvements in our understanding of geology in Victoria. He is certainly a most worthy recipient of the Selwyn Medal.