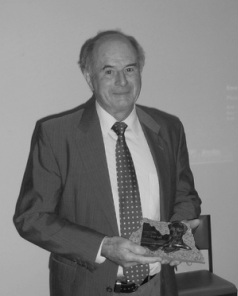 The Selwyn Medal is named in honour of Sir Alfred Selwyn, an eminent Victorian pioneering geologist and founder of the Geological Survey of Victoria. It is awarded, usually yearly, to recognise significant ongoing or former contributions of high calibre to any field of Victorian geology. A candidate for this medal should have made a major contribution to new knowledge of the geology of Victoria, or a significant reinterpretation of it based on critical observations, or has contributed importantly to a major mineral or oil discovery, or have produced important geological publications or have been involved successfully in the development of the geological profession.

Mike Hall was born in Dunedin, brought up in Palmerston North, New Zealand, and educated at Victoria University, Wellington, and at Imperial College, London, where he completed a PhD under the famous structural geologist John Ramsey, on the structural evolution of the Ticino area in the southern Swiss Alps.

Over a distinguished geological career spanning 50 years, Mike has worked in the international and domestic minerals and petroleum industries, for governments, and also in academia. During this time he has made significant geological discoveries in all of the world’s continents, as well as all states within Australia. He has also served the Geological Society of Australia as a former chairman of the WA division and as a committee member in Victoria.

His initial employment was in field mapping for the New Zealand Geological Survey. He also completed a three month field season mapping in the Ellsworth Mountains in Antarctica.

He subsequently worked for BHP for 31 years, initially in the minerals exploration area, based in Western Australia, Queensland, Tasmania and Victoria, and subsequently as a specialist structural geologist for petroleum exploration and production, based in Melbourne.

Since 1995 he has been Professor at the School of Earth Sciences at Monash University, where he has taught large numbers of students, and supervised to a successful conclusion 2 PhD, 11 Honours and 5 MSc students. He has taught BSc students in basin analysis, coal and petroleum, structural geology and seismic interpretation. He also helped supervise the 3rd year geological mapping camp at Broken Hill, and conducted a number of VIEPS courses in basin analysis and sequence stratigraphy to honours students at Monash, Melbourne and La Trobe Universities. He organised and ran field excursions to the Otway Basin for VIEPS and several industry conferences. Even though he officially retired in 2006, he has continued to teach the Monash BSc 3rd year course in sediments, basins and resources, and is currently supervising or joint-supervising 4 PhD, 1 MSc and 2 Honours students.

He was closely involved with the setting up and initial management of the Australian Geodynamics Cooperative Research Centre, which involved liaison with a wide range of academic, government institutions and petroleum exploration companies around Australia.

Among his many other accomplishments, he has made substantial contributions to Victorian geology in the following fields:-

There were also numerous other highlights of his industrial career outside of Victoria, including the following:-

He continues to be active both in the petroleum and geothermal industries in Victoria through his association with the 3D-Geo geological consultancy, and also through supervision of further honours and postgraduate students at Monash University. In addition to research in the Otway Basin, he has ongoing structural geological projects in northern and southwestern Tasmania and New Zealand, particularly the Wanganui and Wairarapa basins. In recent years he has expanded his research portfolio to include sedimentological and basin analysis studies in the Late Tertiary basins of New Zealand, Cretaceous break-up basins in Brazil and sedimentological studies on the palaeoenvironmental context of newly discovered Edicaran fossils in Namibia.