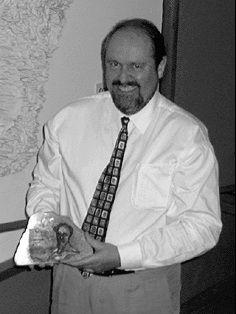 Guy Holdgate has made a great contribution to the geology of Victoria. He started working on Victorian geology in the early 70s as a regional geologist in the Geological Survey, where his considerable stratigraphic skills first became evident. Guy is best known for his outstanding work on Victoria’s brown coal resources. He directed brown coal exploration at the former SECV from about 1977 to 1984, being involved in substantial discoveries of additional brown coal reserves throughout Victoria. He became Manager of Coal Geology from 1984 to 1990, with responsibility for all the SECV's geological activities related to their huge coal resources. Hence, Guy has had a major impact on Victoria’s economy and energy reserves. In addition to his industrial work, Guy has published over thirty scientific papers on various aspects of Victorian geology, ranging from the modern marine sediments of Port Phillip Bay to seismic analysis of cover sequences for the Gippsland Basin reservoirs.

Guy’s great talent is in stratigraphy and his knowledge of the Tertiary geology of Victoria is probably unrivalled. Guy has the rare ability to synthesize data into a coherent picture based on outcrop, subsurface well logs, and seismic profiles. This was no doubt inherited from his formative studies on the marvellous exposures of thick and rapidly deposited Tertiary sequences in New Zealand, where he wrote his masters. He combines the skills of a great field geologist with those of an excellent subsurface geologist. This has allowed Guy to use modern data generated by petroleum exploration in order to produce a broader picture of the basin geology. In this sense, he is the modern equivalent of great Victorian geologists like William Baragwanath, Frederick Singleton or Alfred Selwyn himself. His work on the stratigraphy of the brown coals in Gippsland has contributed greatly to the geology of this area and to our understanding of brown coal deposition worldwide. Guy has placed the brown coals and marine carbonates of the Gippsland Basin into a sequence stratigraphic framework that also incorporates a model for brown coal lithotype cycles. Guy still works in industry as a consultant, but after completing his Ph.D at Monash, he is now principally occupied by research work at the University of Melbourne. This allows him to continue as a prolific researcher and promoter of his passion - stratigraphy.

Guy is widely respected in the Victorian geological community. He is well known as someone who will invariably help you out, and he has graciously mentored many younger geologists. Although quietly and slowly spoken, this hides a profound intellect. His easy going style and good humour is ably matched by his partner Gail, who has put up with his field trips now for several decades. Guy’s only weakness is that he is a Kiwi, but no one is perfect.

Response by Guy Holdgate
Upon finishing BSc Honours at Victoria University in Wellington (NZ) at end-1969, I and most of my colleagues were recruited for jobs in Australia for it was the Poseidon boom time. I worked with a geological consultancy out of Sydney and Perth on a variety of mineral exploration projects throughout Australia for 1½-year stint, then went back to NZ to complete an MSc. In 1973 I began work in the Basin Study section of the Geological Survey of Victoria. I was able to participate in a variety of projects concerning the petroleum and coal resources in the state. My main focus was the deep stratigraphic drilling in the Gambier Embayment of the Otway Basin, and together with co-workers Bruce Thompson and David Ripper we outlined the Portland Trough. The discovery of the Stradbroke coalfield in the Gippsland Basin was also another outcome of our group. My thanks must also go to Don Spencer-Jones and John Knight, GSV directors over that time, and to Peter Kenley for his inspiring local knowledge and field experience. My work in the SECV as coal geologist was under Claus Gloe (Australia’s ‘Mr Brown Coal’) and Colin Barton, both of whom provided a fertile environment of geological excellence in the assessment of the huge brown coal reserves in Gippsland. With a large budget to carry out proving and exploration drilling throughout the state, co-workers Rodney Webster, Paul Bolger, Greg Smith, John Brumley and I spent the following 12 years chasing coal and groundwater prospects for current and future mining projects. We discovered a number of new coalfields, including those at Alberton and Longford. My thanks must also go to the devoted group of technicians and draftspersons for the backup needed to the Exploration & Geological Division. With a reduction to SECV staff in the late 1980s and looming privatisation I set up my own consultancy in 1990, did a PhD at Monash with Ray Cas and Peter Kershaw describing much of the results of the SECV work, and ultimately joined the basin studies group at Melbourne University Earth Sciences as a research associate with with Stephen Gallagher and Malcolm Wallace, working on carbonates of the southern basins and Northwest Shelf. I remain intensely interested as a working geologist on the State’s basin geology but my biggest thanks must go to my partner Gail and son Nigel for their encouragement and family support over the years. Finally I wish to thank the GSA Victoria committee for awarding me the Selwyn Medal.