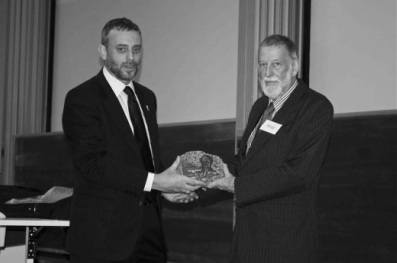 The Geological Society of Australia, Victoria Division, is pleased to award the Selwyn Medal for 2008 to Professor Bernie Joyce, formerly of The University of Melbourne.

Bernie Joyce has made significant fresh contributions to Victorian geology – including geomorphology, regolith, volcanology, natural disaster assessment, geological heritage and history of geology – over a career spanning some 45 years.
For 40 years he has studied the Newer Volcanics of Victoria, producing a number of research papers and field guides and supervising many student projects. He has also worked on regolith landform mapping of the Western Victorian volcanic plains, and produced an assessment of volcanic risk and hazard in southeastern Australia.
He is the former Chair of the Australian Heritage Commission Natural Evaluation Panel (Victoria), and is currently a member of the National Trust (Victoria) Landscape Committee, working on problems of volcanic landscapes.
He has worked on the morphotectonics of the Central Victorian Highlands, and the neotectonics of SE Australia. In liaison with the Co-operative Research Centre for Landscape Environments and Mineral Exploration, universities and the Geological Survey of Victoria, he mapped and interpreted the regolith of central Victoria, and published reports with the Survey.
He co-authored the Geomorphology chapter in the Geology of Victoria (2003), and has been a member and chair for over 12 years of the Victorian Government’s Geomorphology Reference Committee.
He was the Convenor of the national Standing Committee for Geological Heritage of the Geological Society of Australia from 1983 to 2004. He has secured major grants from the Australian Heritage Commission to organise heritage workshops, produce the first report on Australian sites of national and international heritage significance, and a volume on geological heritage methodology. His geological heritage work at the international level was acknowledged by an invitation to be a keynote speaker at the 1993 Malvern (U.K.) conference on Geological and Landscape Conservation.
Recently he has made contributions to historical studies in geology coordinating the “History of the Geology Department Project” at the University of Melbourne, taking over as chair of the GSA’s Earth Sciences History Group (ESHG), writing historical articles, and setting up a history website. He proposed, organised and coordinated the ESHG Conference in November 2007.
He is currently studying the landforms of Western Victoria to see what they tell us about future volcanic risk, and also how best to look after the landscape heritage of the Plains. Following Bernie’s recommendation in 2004 the United Nations Educational, Scientific and Cultural Organisation in 2008 declared the Kanawinka Global Geopark, the first geopark in Australia.