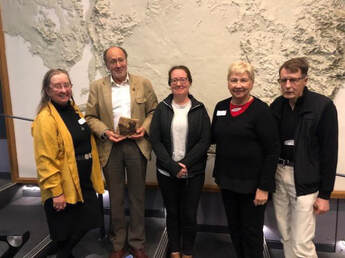 Susan White, Fiona Glover, Ingrid Campbell and David Moore congratulate Neville on his Selwyn Medal award.
Neville Rosengren is a geomorphologist of international renown with over 50 years
experience who has made substantial contributions to Victorian geology though his
geomorphological work over many decades, especially in the areas of geological/geomorphological heritage and sites of scientific interest and coastal surface geology .
He has been engaged as a consultant by Victorian and Commonwealth Government
agencies, by major private sector environmental consulting firms and for several years was senior environmental consultant to the United Nations University program on coastal resources management in Indonesia. He is an Honorary Associate at La Trobe University and has been a member of the Geological Society of Australia since 1974.
Neville has been a principal or sole investigator for a large number of studies of features of Geological and Geomorphological Significance as well as for geological matters in various planning disputes. These studies have covered most areas of Victoria. He is, in particular, regarded as a specialist in the geomorphology of the coastal landscapes in Victoria, as well as the eastern uplands, western uplands and the Western District volcanic plains. Neville has made a significant contribution to the understanding of Victorian geology, especially surficial geology and geomorphology. He has contributed to text books, consultants’ reports, research papers, field workshops on Victorian landforms, and has mapped and listed important geological heritage sites in the State for their conservation.
Many of the sites in the GSA (Vic) geological heritage sites database were documented by him.
His publications on Victorian geomorphology are numerous and diverse covering aspects of volcanic landscapes (eruption points), coastal morphology, alpine ecology and geomorphology, and sites of geomorphological significance. In particular he has written numerous reports detailing the geology and geomorphology of much of Victoria for government departments, nongovernment organisations and consulting companies. Neville is an inspiring teacher who has exposed a large number of students over many decades to the joys of geology, especially geomorphology in several tertiary institutions in both geography and geology departments. The importance of geomorphology is sometimes ignored in earth science teaching and Neville’s work has helped address this. He has been very generous with his time in running field workshops and courses to a wide range of groups: academic/educational, industry and community. His highly successful Coastal Environmental Geomorphology VIEPS field course has exposed students to Victoria’s coastal geology for over 20 years.
We consider Neville a worthy recipient of the 2019 Selwyn Medal because of his significant contribution to the understanding of the unique geomorphology of the State, his ongoing teaching and mentoring and research in regolith studies in Victoria, and his role in communicating his science to the broader community as an ambassador for the geology of Victoria.