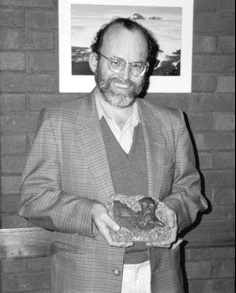 Alfons Henry Martin VandenBerg (Fons to all) was born on January 16 1945 in Eindhoven, southern Netherlands. He arrived in Melbourne in November 1960 after some travel around Europe in his early teens. He learned English and completed his secondary education at night while working as a messenger boy and in an office by day. Perhaps, like Selwyn, he learned to love the outdoors from his first views of the Alps; somehow he discovered geology. In 1963 he took a job with the Mines Department and started in the Core Laboratory. Here he won a fully funded Public Service Scholarship which enabled him to study at Melbourne University where, in 1967, he completed a Bachelor of Science majoring in Geology and Zoology.

At the suggestion of the then Director of the geological Survey of Victoria, Dr Don Spencer-Jones, he became the second geologist in the Mapping Section, initially for a six-month period. He began mapping around Melbourne, producing 1 inch to 1 mile sheets of the greater Melbourne area (Ringwood, Melbourne, Sunbury). It was in his early work on Ringwood that he appreciated that detailed mapping made it possible to subdivide the monotonous Palaeozoic sequence into packages and then to extend these as regional units.
He was seconded to the Melbourne and Metropolitan Board of Works for six months in 1970 to map the upper Yarra and upper Thomson catchments in order to solve some costly problems with the Thomson-Yarra tunnel project. The mapping eventually covered the Warburton 1:250,000 map sheet area which in turn led to the adjacent Bairnsdale 1 :250,000 mapping. These projects were completed in 1975 and provided some interesting insights into the stratigraphy and structure of the Melbourne ‘Trough’.
His work led to more detailed mapping projects. The first was stimulated by the copper-zinc discoveries at Benambra and the request by industry for detailed mapping of the complex volcanic units of the Limestone Creek area. The Kilmore and Lancefield 1 :50,000 map sheets contributed significantly to the understanding of the geology and palaeontology of the Melbourne ‘Trough’; the Murrindal and Bendoc 1 :100,000 maps were also significant contributions with a growing need for modern mapping in areas of complex volcanic and structural history in Victoria. His close mapping association with Karin Orth, a student of Ray Cas, proved a fruitful combination and led to his observant ways being concentrated on the complex volcanic suites of this region.
Team effort, with Fons' experience offering a major role to develop younger graduate geologists in the field, has been a feature of the past 12 or so years. This period has seen a whole new understanding of the State's geology. Fons is recognised by workers in the Lachlan Fold Belt as the expert stratigrapher, based on his developed understanding of the biostratigraphy of graptolites, fossils whose presence in the State was first recognised by Selwyn. Fons was self-taught in the evolutionary development of these fossils, because much of the knowledge of previous workers was not written up. He worked from the 1890s records of T.S. Hall and from figured specimens from overseas to develop what is currently recognised as one of the world's most detailed Upper Ordovician graptolite zonations.
He used this zonation to identify structurally repeated fossiliferous shale zones in mapping the Bendoc map sheet and, more recently, in 1994/95 he has led and contributed to field programs in the Orbost and Mount Useful areas as part of the Victorian Initiative for Minerals and Petroleum. Partly as a result of mapping with the aid of new and innovative techniques, like detailed low-level airborne geophysics, he has, together with the GSV team, identified flat thrusts in the Mount Useful region This significantly changed the interpretation of the Cambrian greenstone outcrops in the area. He has played a significant part in discussion and publication with other leading geologists working on the structural history of Victoria and has made his mark in the careful documentation of deformation of the various rock packages and their relationships to intrusive rocks.

CITATION
In the view of his proposers, Mr Alfons VandenBerg's contribution to the understanding of Victorian geology has been equalled by few. His particular contribution is the detailed world zonation of the Upper Ordovician, using graptolites from the Victorian sequences which he first mapped and subdivided into manageable packages in his early mapping. Based on this and his self-developed biostratigraphic expertise in the graptolite successions of the Palaeozoic, he has helped unravel the very complex structural evolution of the State. He has assisted others working in similarly deformed areas of the Lachlan Fold Belt. Like Selwyn, Mr VandenBerg is a field geologist of extraordinary perception with a single-minded approach to geological problems. His studious approach and detatailed examination of rocks and structures, both in the field and in the laboratory, has led to his recognition as one of the country’s finest geologists and the appelation of 'Mr Victoria'. He has developed through observation, wide travel and collaboration with other experts, a daunting ability to recognise sedimentary and volcanic textures and processes and to identify complex structural features in outcrop.
Fons has the rare capacity to place individual observations in the wider context by piecing together observations on individual outcrops into the bigger picture. He has followed in the tradition established by Selwyn of making the pursuit of geology his life. In short, Fons VandenBerg is a fitting recipient of the inaugural Selwyn Medal.