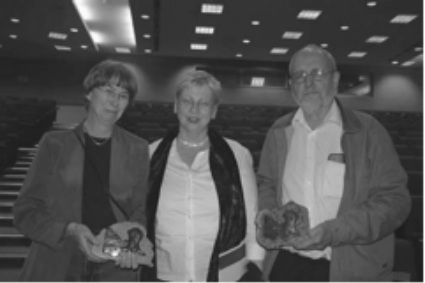 Pat Vickers-Rich (left), Ingrid Campbell (centre) & Tom Rich (right)
Tom and Pat’s achievements include:
• Discovery of oldest fossil mammals in Australia (Nature 1985, Science 1997).
• Recognition of likely Early Cretaceous placental mammals in Australia.
• Recognition of a monotreme with the most primitive structure known for a middle ear in mammals (Science 2005).
• Discovery of the most diverse polar dinosaur assemblage anywhere on Earth.
• Discovery of the youngest temnospondyl amphibian that spotlights the early isolation of the Australian biogeographic region.
• Functional analysis of polar vertebrates.
• Twenty seven years of successful excavation of fossils under extreme conditions.
• Authorship of seven books on the vertebrate palaeontology of Australia; creating most of the prime literature from textbook to popular for this continent.
• Writing of dozens of in depth articles about polar dinosaurs and mammals for popular magazines (e.g., Scientific American, Qantas Inflight Magazine, Natural History).
• Organising exhibitions centred on polar biotas, dinosaurs and vertebrate faunas of the Phanerozoic (The Great Russian Dinosaur Exhibition, Wildlife of Gondwana, Dinosaurs of Darkness).
• Involvement in more than a dozen documentaries relating to the polar dinosaurs and the polar Mesozoic biotas of Victoria (BBC, ABC, Channel 4 UK). These include contributions to When Dinosaurs Ruled the Earth, and a film entitled The Terrible Lizards of Oz and to the BBC series Walking with Dinosaurs. Tom’s work digging up dinosaurs in the frozen permafrost of northern Alasaka is being made into another full length international documentary presently.
• Supervision of Australian scientists who began their careers as students of Tom and Pat, including Tim Flannery, John Long, Andrew Constantine, Robert Baird, Charles Meredith, Sanya Van Huet, Erich Fitzgerald.

They have won several awards including:
The 1991 and 1993 Eureka Award for their books “The Dinosaurs of Darkness” and “Wildlife of Gondwana,” respectively. They also won the Committee for Research and Explorations Chairman’s Award from the National Geographic Society in May 2000.
In 1993 Dr Rich and Professor Vickers-Rich were asked by Australia Post to provide advice on a major stamp issue focused on Australian dinosaurs.

In summary no two people, working as a team, have had such a powerful impact on the study of Australian palaeontology, and its dissemination to the general public as have Tom and Pat done. Their contributions to putting Victorian geology and palaeontology into the international arena are unsurpassed, and they are most deserving recipients of the 2007 Selwyn Medal.