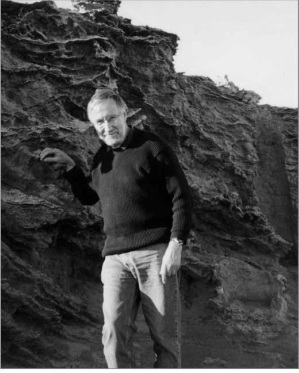 Professor Chris Wilson has brought to Victoria a background of experience elsewhere; he has applied that experience both to the elucidation of fundamental geological problems within Victoria, and to ore discoveries; and he has continued to be deeply interested in major geological problems in other countries – other continents. In addition, Chris has supervised numerous students, and taught and encouraged many more, at The University of Melbourne, and also participated in the evolution of earth science teaching in Victorian Universities.

Chris took his first degrees at the University of Sydney in 1965 and 1966, and completed his Doctorate in 1970 at ANU, on The microfabric of a deformed quartzite sequence, Mt Isa, Australia. He then spent some years in Holland before returning to an academic position in the then Department of Geology at The University of Melbourne in 1974. His publications through the first few years in Victoria reflect his deep interest in the deformation processes in rock-forming minerals, studied with both optical and electron microscopy. This led to setting up of a laboratory to study ice deformation experimentally, work that has continued from 1979 to the present day - with outcomes that are being used now to study vein arrays in the Victorian Goldfields.

In 1982 the first of his numerous papers on aspects of Victorian geology appeared, and since then such papers have appeared almost every year, as Chris and his students applied their knowledge to unravel the structure of the Mallacoota area, or the contact metamorphism at the Stawell granite. The number and range of these contributions is too great to digest here, but many of Chris’s insights were shared in his contribution to the Geology of Victoria, 3rd edition, while the Joe Harms Medal, awarded to him with John Miller and Jon Dugdale, recognised the work that lead to the discovery of the Golden Gift gold deposit at Stawell in western Victoria.

In parallel with this, Chris has also worked productively in the field in both Antarctica and Asia, participating in major collaborations in both continents, and this work continues now. In all, his publication list encompasses over 170 papers, chapters, guides, and reports – and an award-winning video demonstrating shear processes in ice, as a rock analogue. The contribution that Chris has made to Victorian and Australian geology through his teaching activities is also significant. Undergraduate students have frequently returned from field trips with Chris with new enthusiasm for the subject. He has supervised over a hundred Honours and Masters students, and more than 30 PhD students (including a small number of co-supervisions, and students now in process). He was Head of the Department for only three years, between 1989 and 1991, but those years saw significant changes in Melbourne and Victorian geology education. Chris oversaw the amalgamation of the Geology and Meteorology departments to form the School of Earth Sciences, in 1989. Then, he worked with his colleagues at La Trobe and Monash Universities to bring about the creation of the Victorian Institute of Earth and Planetary Sciences (VIEPS), and negotiated major grants from the Victorian Education Foundation to push the new venture out. On top of that, he also initiated the Hydrogeology program within the School, anticipating the growing demand from incoming students for hydrogeology and environmental geology studies. Each of these developments has left a lasting, positive mark on the School at Melbourne, and on Victorian geological affairs.

Chris Wilson has been involved in numerous other administrative activities at University, state, national, and international levels, including reviewing programs, organizing meetings, as well as various faculty boards. To come back to Victoria and the GSA, Chris has been a GSAV Committee Member for six years, and Division Treasurer in 1988, as well as a longtime servant of the Specialist Group for Tectonics and Structural Geology.